We have just completed our latest Data Centre project in Frankfurt for the WBS Group which was planned and implemented quickly, safely and on time.

WBS approached JWI to arrange the offloading and installation of Excool EIC units at a new data centre in Frankfurt. The client needed us to deal with tight access conditions, the existence of a water tank underground meant the crane could not be positioned in the ideal, closest location to the installation position. They needed us to make an opening by removing the building façade and replace it as well as designing the lifting method and positioning the units in what were very restricted final positions.

JWI turned everything round in a month, making a site visit to Frankfurt after which we were able to save the client money by designing a specialist lifting frame (also made by our workshop within that same month) which meant that they did not need to build scaffolds at two different openings into the building. Using our existing German contacts we organised other specialist equipment in Germany as well as bringing the lifting frame and other equipment out from the UK.

This picture shows our team using tracking plate to spread the load while skating across the open grating floor.

Darren Penny, Senior Project Manager, at WBS said “We were delighted with JWI’s safe working approach, their speed of response, their ability to think outside the box and save us money, such as with the lifting frame they designed specially to fit the EIC units. These installations had a number of complex features, the restricted access, tight working conditions, need to coordinate with other trades on site and JWI fulfilled all our needs and more. We will be delighted to be working with JWI again on future stages of our Frankfurt data centre projects and elsewhere. 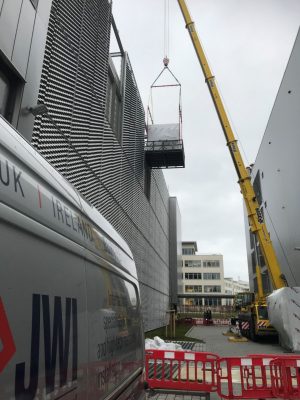